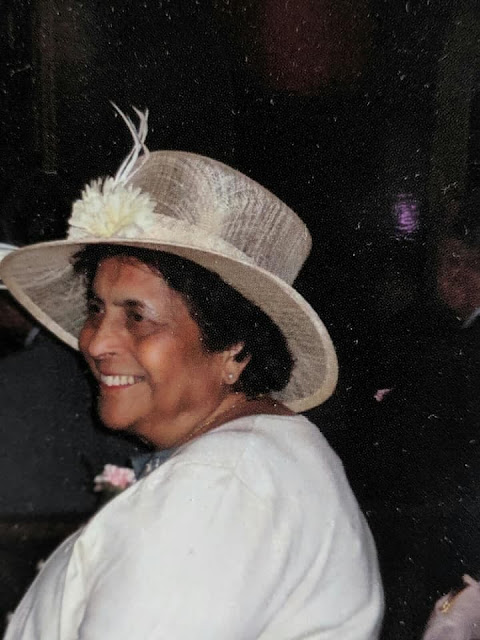 Thank you all for being here today at St. Joseph’s to celebrate the life of my grandma Rita Maria Gracias
.
On this sombre occasion, we remember that shadows are only proof of sunshine, and Grandma always brought sunshine.

Grandma spent her childhood in sunnier climes in Goa, Belgaum and Kenya; as part of a big family with six brothers: Elias, Theo, Moses, Joe, Cresent, and Tom as well as her sister Lucy who passed away at 6 months. She enjoyed badminton and athletics (which she often won) and was part of the sodality, first as a girl guide and later with the Legion of Mary.

When grandma lost her father at the young age of 13, times were tough, they had to move from their big house into just two rooms. Grandma and her eldest brother Elias helped Mama look after the younger children, particularly Tom who was only two months old at the time.

When she was older, always  a favourite of the nuns, grandma was asked by them to become a teacher at the Catholic Parochial school and later moved to St. Teresa’s. To this day the impact she made on all her student’s lives is felt through the many cards and letters she continued to receive from them, over 50 years later.

Grandma had many friends at school including her gang RNAS (Rita, Nina, Annie and Sylvie), but one of her school friends Lily, had perhaps the biggest impact on her life, introducing grandma to her brother, my grandpa John.

When mama knew it was grandpa John grandma had chosen, overall her other admirers – who, grandma would want me to tell you, she never went with unescorted – mama said “he’s so old”, but grandma had always been taught “better to be an old man’s darling than a young man’s slave”. They had a very happy marriage, celebrating every birthday and anniversary together, with king rolls, croquets, and biryani.

Cooking was a big part of grandma’s way of looking after not only her own family but also their many guests over the years. Grandma was always a gracias host – quite literally – grandpa John always made sure grandma had a chance to show off her hosting talents, inviting family from across the world.
Together they made a home filled with fun, music and laughter for their children Melissa, Genny and Stan. At the railway quarters near the RGI’s sports and dances; then at a maisonette with neighbours Gladys and Donna Prisca, who would become lifelong friends.
In 1968 after many happy years in Kenya, she moved to England with her children and eventually found a home, here in Wembley. As grandma wasn’t qualified to teach in the UK, she had to find a new profession and took up a job in accounts, first at a tapestry shop in Sloane Square and later at London Weekend Television, which gave her a chance to meet all the celebrities. When she got tickets to see shows like The Price is Right; the cameraman would pan across to show her infectious smile.

Grandma had a difficult 1983, when, within a few short months, she lost her husband John, Mama and her brother Theo. Somehow, she made it through that tough year to become a stronger, independent woman – travelling around the world in tour groups, or with friends and family. Grandma was always proud of the places she had been and languages she’d picked up along the way. She would happily bend anyone’s ear to say “I have been to Italy, France, Hong Kong….” Or “I speak Swahili, Konkani, Portuguese…”.
In retirement, grandma spent her time playing cards and scrabble with her grandchildren Lisa, Lynn, Sean and I, watching sports (football, tennis, snooker…), cooking good food, sewing and telling stories.

Grandma was a devout Catholic woman who felt lucky to have met Padre Pio and work with the founder of the Legion of Mary, Edel Quinn. Grandma would be pleased to see us here today in her parish; if she was sitting in the congregation, she would be the one in the middle row, singing the loudest, and wearing the best hat. More recently when she couldn’t attend mass, she would watch it daily on EWTN and it is fitting that in her last moments she was praying a Hail Mary with a nun at the home.

We all love and miss you grandma, and take solace that you are with mama, your brothers and grandpa John, who is probably singing his favourite song for you, which sums you up so well – you are my sunshine.