Makhan Singh, Voice of the Workers

At the beginning of the 20th century, the British Empire had everything a superpower could want:  colonies all over the world; armed forces to put down any resistance anywhere; stolen resources to remain a superpower for generations; expertise to divide-and-rule the conquered people; educational and media frameworks to spin its oppression and exploitation out of existence.  It's enduring creation was a comprador class embedded to capitalism to death. Wikipedia (2019) indicates the extent of the Empire:

By 1913, the British Empire held sway over 412 million people, 23% of the world population at the time, and by 1920, it covered 35,500,000 km2 (13,700,000 sq mi), 24% of the Earth's total land area. As a result, it's political, legal, linguistic and cultural legacy is widespread. At the peak of its power, the phrase ‘the empire on which the sun never sets” was often used to describe the British Empire, because its expanse around the globe meant that the sun was always shining on at least one of its territories.

The future could not have looked brighter. What can possibly go wrong? The Empire had not reckoned with the organised power of the working classes alongside the poor and the disenfranchised.

It had not reckoned with the leaders from such organisations, armed with the ideology of socialism, dreaming of liberation, equality and justice. They had not reckoned with the East African Trade Union Congress and the single-mindedness, the conviction and energy of its founder and leader, Makhan Singh.  The Empire detained and restricted him for almost four years in India within six months of his arrival there from Kenya in 1939.  Just six months of anti-imperialist activity and he became an enemy of the Empire.  But his detention merely strengthened his resolve to oppose all forms of exploitation and oppression.  He carried his resistance to Kenya where he returned in 1947.   He was soon active in the working class and anti-imperialist struggles.  This time it took the British Kenyan colonial authorities four years before detaining him, this time for 11 years, from 1950 to 1961 — the longest 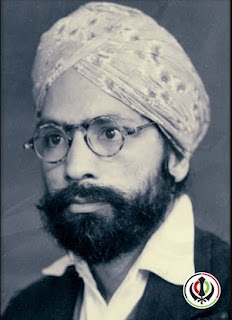 period anybody had been detained in Kenya. But that was time enough for Makhan Singh to weaken the foundations of the Empire.

The British Empire, with all its political, economic and military might could not suppress this extraordinary person Makhan Singh had but one vision — that of liberation from imperialism.  They detained him miles away from people, in a hostile climate, hoping to suppress his resistance or to buy him out of resistance.  He endured detention until his release in 1961.

Makhan Singh began working on a major project to document the history of the trade union movement in Kenya. He wrote perhaps the most important books (Singh, Makhan, 1969, 1980)  on the history of Kenya and its working-class struggles.  He also left behind an archive of 20,000 files that the ruling class has sought to keep hidden from public view.

Makhan Singh was the first person in Kenya to demand uhuru sasa — independence now — in 1950. He saw that the struggle of the working classes was intimately linked with the national struggle for liberation  — workers’ economic demands could not be achieved without acquiring political power  The trade unionists active with him, like Bildad Kaggia and Fred Kubai, carried the worker ideology and militancy into Mau Mau and the armed guerrilla movement against the British Empire.

Just as the British Empire represented the power of corporations and finance capital, the EATUC (East African Trade Union Congress)  and Makhan Singh represented the power of workers, united and organised for socialism.  As one of the leaflets during a strike organised by Makhan Singh in 1936 said, “The struggle between capitalist and workers has started in earnest”.

Makhan Singh will long be remembered as the voice, the guide and the embodiment of the working class struggle in Kenya.  Imperialism may have detained him in person, but it could never detain his ideas and his achievements.

My father
By Hindpal Singh

Makhan Singh (1913-1973 can rightly be called the father of labour movement in Kenya. And since the labour movement was closely interwoven with the political struggle in the colonial period, Makhan Singh was also a great freedom fighter. He was amongst the first ones to use the slogan Uhuru Sasa, meaning "Freedom Now", in his famous speech on May Day 1950, just a few days before his arrest and long detention by the Colonial Government in remote parts of Kenya.

Born on 27th December 1913, in the village of Gharjakh, Distt. Gujranwala (now Pakistan), Makhan Singh spent his early years in utter poverty and very difficult circumstances. He was only seven when his father Sudh Singh left for Kenya in 1920 to join the Railways as an artisan, leaving Makhan Singh and his younger sister, in the care of their mother. For the next seven years, Makhan Singh studied in various Sikh Missionary schools in and around his village. It was also during this period that the incident of “Jallian Wala Bagh" took place, in which several hundred innocent and defenceless Indians were massacred in Amritsar in cold blood by General Dyer.

The above incident, and the Sikh history of martyrdom and self-sacrifice that Makhan Singh might have read or experienced in his formative years, perhaps left a lasting impression on his mind. In his own words, while writing a short autobiography in the third person, he wrote: “During his school days in India his mind was influenced by teachings of Sikhism and Sikh history and also by the Congress struggle for freedom of India, under the leadership of Mahatma Gandhi”.

Makhan Singh first came to Nairobi in 1927, at the age of 14, together with his mother and sister, to join his father, who by now had left the Railways, and had started a small contracting business and a part-time printing press. After passing his London Matriculation examination in 1931 from Government Indian High School (now Jamhuri High), Makhan Singh joined his father's printing press to give him a helping hand. It was during this period that he started taking a keen interest in the labour trade union movement. By 1935 he succeeded in transforming the Indian Trade Union (founded in 1934) into the Labour Trade Union of Kenya.

According to Prof. Bethwell Ogot, a renowned historian of Kenya, “Makhan Singh not only succeeded in maintaining the non-communal nature of the trade-union movement but by 1939, brought a large majority of African workers into the fold to make the union truly non-racial”. One of the first labour strikes organised by Makhan Singh was against the employers of the printing industry, including his own father who owned a printing press.

In 1939, just at the start of the Second World War, Makhan Singh went to India, together with his family. Within six months of his arrival, he was arrested by the British Government for his political activities, and imprisoned for two and a half years in various camps in India. He was finally released in January 1945, after serving a further two-year restriction in his village.

After his release, he was active in the struggle for independence for India and was a sub-editor of Jange Azadi, (Struggle for Independence), a weekly paper published in Lahore. He left Lahore with his family two weeks before the India/Pakistan partition, en-route to Kenya, leaving his family behind in Bombay. He celebrated India’s Independence Day, 15th August 1947, on board the ship, on his way to Mombasa.

Thus ended his sojourn in India. And as he stated in his autobiography “One main aim of my life. — the freedom of India — having been achieved”. He never went back to India again.

Makhan Singh returned to Kenya on 22nd August 1947. He was declared a “prohibited immigrant” by the Colonial Government, for his political activities when he was previously in Kenya. He was asked to quit Kenya within 30 days. He declined to obey the quit order and was therefore prosecuted. The Court acquitted him, and the Government could not deport him.

After his acquittal, he resumed his political and trade union activities. In 1949, he founded the East African Trade Union Congress under the patronage of Kenya African Union. This was the period when the trade union movement was synonymous with the political struggle.  It was on May Day 1950 that he made an impassioned speech at Kaloleni Hall when he used the slogan Uhuru Sasa which set the ball rolling for Kenya’s eventual independence from the colonial yoke.

Soon after his speech at Kaloleni Hall, Makhan Singh was arrested on May 15, 1950, and was restricted in Lokitaung, near Lake Turkana, for almost three years, then moved to Maralal for another seven years, and later to Dol Dol for the last one year. He was finally released in October 1961, after serving a restriction order of more than eleven years. During this period he was not allowed to see anyone from outside except his immediate family members.

After his release from detention in 1961, he joined Kenya Freedom Party (KFP), an associate of Kenya African National Union (KANU). On 21st October 1962 he joined KANU, when its doors of membership were opened to all irrespective of race, colour or creed. KFP voluntarily dissolved itself a few days later. On 12th December 1963 Kenya attained its independence, and “second main aim of his life — to see Kenya achieve its independence — was achieved.”

Because of his leftist leanings, Makhan Singh was not given any position or recognition in the new government. To keep himself occupied in the post-independence era, he became Secretary of the Historical Association of Kenya and wrote two authoritative volumes on the "History of Kenya Trade Union Movement", the proceeds of which were shared equally between the Historical Association of Kenya and the Central Organisation of Trade Union (COTU).  He did not take a single cent from the proceeds.

Since his death on 18th May 1973, two books have been written on the life and times of Makhan Singh. The first one called “The Unquiet”, authored by Zarina Patel was published in Kenya in 2006. The second one called “A Revolutionary Kenyan Trade Unionist” and edited by Shiraz Durrani was published in 2015. A play on Makhan Singh, called Mungu Comrade was also written in Punjabi by Atamjit Singh, an award-winning playwright from India. It was published in 2010, and recited in several countries, including Kenya.

Makhan Singh had an indomitable spirit to lead the path of dharm or righteousness, without wavering from his inborn beliefs and ideals. He also left a great legacy behind, of totally selfless service to his country of adoption, Kenya without expecting any rewards whatsoever.