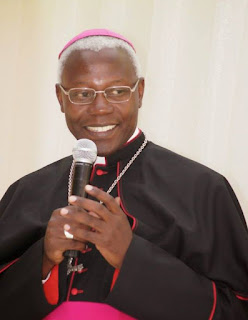 NEW APOSTOLIC NUNCIO APPOINTED TO NEW ZEALAND AND THE PACIFIC

Pope Francis has appointed Archbishop Novatus Rugambwa as Apostolic Nuncio to New Zealand and Apostolic Delegate to the countries of the Pacific. Archbishop Rugambwa was born in Bukoba, Tanzania in 1957, ordained a priest in 1986 and Archbishop in 2010. He entered the diplomatic service of the Holy See in 1991 and has served in Nunciatures in Panama, Republic of Congo, Pakistan, New Zealand, Indonesia, Angola and Honduras.

For a period of time he was also Undersecretary of the Holy See’s Pontifical Council for the Pastoral Care of Migrants and Itinerant People. He replaces Archbishop Martin Krebs who last year was appointed Apostolic Nuncio to Uruguay. President of the New Zealand Catholic Bishops Conference, Bishop Patrick Dunn said of the announcement, “we’re delighted with the appointment of Archbishop Rugambwa and warmly welcome him back to our shores in his new role. Our prayers are with him as he prepares for his move and we look forward to working with him in the years ahead.”

The New Zealand Catholic Bishops Conference (NZCBC) is the assembly of the Catholic Bishops of New Zealand coordinating national activities and ministries of the Catholic Church. These include education social justice, Māori advisory, communications and engagement with the public, liturgy, ecumenism, bioethics, interfaith relations, pastoral work in prisons and hospitals, and more. ENDS Media enquiries – Amanda Gregan Telephone 021 611 052
- May 26, 2019