Augustinian Martyrs of Mombasa and Companions

Servants of God: Anthony of the Nativity, Anthony of the Passion, Dominick of the Birth of  Christ and the Community of Catholics
1Source:  http://midwestaugustinians.org/martyrs-of-mombasa/ 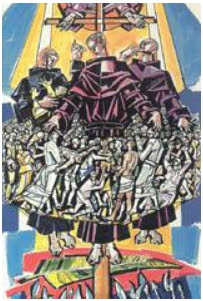 Anthony of the Nativity and his companions (died 1631) were put to death when they refused to renounce their faith in Jesus Christ.

Mombasa, a city in what is now Kenya, was a Portuguese colony during the early part of the 17th Century. Most of its citizens were Animists or Muslims, but there was a Christian community there too, comprised of both Portuguese and native people. Augustinians had been pastoring the Church in Mombasa since 1597.

Prince Jerome Chingulia 2 was the ruler of Mombasa, serving as the
representative of the Portuguese Viceroy of Goa. Although Chingulia had
been converted to Christ and been Baptized, he returned to his earlier Muslim faith.

Those Christians who were able to escape took refuge in the Catholic Church. The three Augustinians there, Anthony of the Nativity, Anthony of the Passion and Dominick of the Birth of Christ, tried futilely to convince Chingulia to set the Christians free.

Chingulia, for his part, attempted to make the Christians embrace Islam. Encouraged by the three Priests, the Christians chose to remain faithful to Christ.

On August 21, Chingulia ordered the three Augustinians, along with the other Christians sheltered in the church, to appear before him. He deceived the Christians, making them think that he was going to send them to the nearby island of Pate, where another Portuguese garrison was stationed.

They marched to the port, but instead of finding a boat there to carry them to Pate they were met by a group of armed men. These men proceeded to attack the Christians with swords, clubs and oars. The Christians, holding fast to their faith, were martyred. Only one avoided death by renouncing Jesus Christ.

The brutal martyrdom that took place that day did not succeed in wiping out the Christian faith. There is a vibrant Catholic community in Kenya today which proudly remembers the faith and courage of the Mombasa martyrs. Augustinian friars help to provide pastoral care.

The process of beatification and canonization of the Martyrs of Mombasa began shortly after their death. The diocesan investigation opened in Goa in 1632. Josef Sciberras, O.S.A., the Augustinian Postulator of Causes, is now overseeing the progress of their cause.

With thanks to John J. D'Souza.


Mombasa Martyrs –another version
The 1600s
Catholic Church
Kenya
The Mombasa Martyrs were 288 men, women and children who gave their lives for the Christian faith during a rebellion against the Portuguese in the seventeenth century. For centuries, Arabs had been sailing and trading up and down the coast of eastern Africa. There they had established settlements, such as Malindi, Mombasa and the islands of Zanzibar and Pemba. The local Bantu population accepted the Islamic faith and each settlement became a small city-state ruled by a sultan. These Islamized Bantu became known as the Swahili peoples. In the early 1500s Portuguese ships appeared in the Indian ocean and visited the coastal settlements. The Portuguese were also primarily traders, and they created a maritime, commercial empire centred on Goa, a town on the coast of western India.
There was considerable rivalry between Malindi and Mombasa, both situated on the coast of what is modern Kenya. When the line of Mombasa sultans died out, the Sultan of Malindi took over Mombasa and invited the Portuguese in Goa to share power with him. The Portuguese settled in Mombasa and built their stronghold of Fort Jesus, which still stands today. At the same time, they invited missionaries of the Order of Saint Augustine to come to Mombasa in 1598, to act as their chaplains and also to evangelize the local Bantu. The Augustinians set up mission stations along the coast, and near Fort Jesus in Mombasa established a “house of mercy” to care for the sick, disabled and orphans. Some of these were baptized.
The work of the Augustinians was severely compromised by the immorality and brutality of the Portuguese in the Fort. One dispute led to the murder of the Sultan, who left a seven-year-old son called Yusuf al-Hassan. The Augustinians took this orphan to Goa, where he received an education and was baptized with the name Jeronimo. He joined the Portuguese navy and married a Portuguese noblewoman called Isabel Varella. In 1626, the Portuguese made Jeronimo their client sultan of Mombasa, where there were already some 2,000 Christians. Jeronimo found himself subject to the Captain of Fort Jesus and incurred the odium of the Muslims for having become a Christian. It was probably inevitable that he renounced his Christian allegiance in 1631 and decided to lead a revolt against the Portuguese.
On 16 August, the Sultan gathered supporters from the mainland and entered the Fort as if to attend Christian worship. He then personally murdered the sick Portuguese Captain with a dagger, while his supporters set fire to the town, and townsfolk sought refuge with the Augustinian missionaries. At this point, the rebellion ceased to be aimed at merely removing the Portuguese administration, and became a direct attack on Christianity itself. The Sultan offered the missionaries their lives if they would become Muslims. He also made the same offer to Don Antony of Malindi, another Christian convert and a relative of his. All refused to give up their faith. The sultan’s men attacked the church on August 20th killing all who took refuge there, except for one man who agreed to apostatize. Other women and children, Africans and Portuguese gathered on August 21 and went through the town singing Christian hymns. They were forced on to a boat in which they were massacred with knives and spears. Of the Portuguese, 47 men died with 39 women and 59 children. Of the Africans, 72 men died together with their wives and children. Isabel Varella refused to give up her faith, but she was enslaved instead of being killed. The Captain’s wife and daughter also died for their faith. Sultan Yusuf (Geronimo) abandoned Mombasa in 1632 to become a Red Sea pirate and the Portuguese administration returned.
A commission was set up by the Archbishop of Goa to establish whether these people had died for the faith and what opinion their friends and neighbours had of them. The commission collected evidence from eyewitnesses from 17 August 1632 to 22 January 1633 and the results were impressive. The authorities in Rome accepted the Mombasa Martyrs as candidates for beatification and the process was referred back to Goa in 1636, after which it was dropped. We do not know the reason. Were there political reasons? Was it because of lack of funds? No one knows. At any rate, interest in these martyrs has now revived and their cause has been taken up again.
Aylward Shorter M.Afr.
Bibliography
G.S.P. Freeman-Grenville, The Mombasa Rising against the Portuguese 1631. From Sworn Evidence. (London: Oxford University Press, 1980).
Malachy Cullen, The Martyrs of Mombasa (Nairobi: Paulines Publications Africa, 1997).
This article, submitted in 2003, was researched and written by Dr Aylward Shorter M.Afr., Emeritus Principal of Tangaza College Nairobi, Catholic University of Eastern Africa.