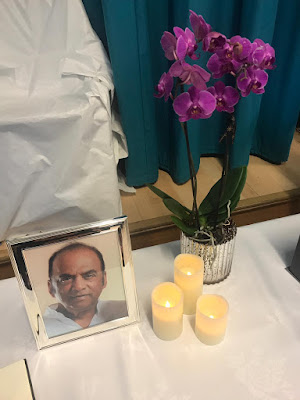 I am honoured and indeed privileged to have been requested by Marjorie to deliver this eulogy today for her beloved husband, Steve  --  a man who had an impact on all our lives in so many ways in the past. Each of you here would have your own fond memories of Steve, based on your individual relationships with him. Indeed one could write a novel about the life of one as popular and unique as him. In this regard many of you would have read the very informative and interesting article by the journalist, Cyprian Fernandes, one of Steve’s best friends. I will endeavour therefore not to cover the same ground as done so in Cyprian’s splendid account.

Many here today, like Steve, would have enjoyed all the benefits of living in Kenya, the country of our birth where, in the very cosmopolitan capital city of Nairobi, we spent much of our childhood and adult lives. Our parents would have come from Goa and other lands afar to settle and work in this wonderful land of plenty. They were industrious settlers and brought up their families with hardship and with discipline; and in keeping with treasured values of background and tradition; they forged bonds of love and respect for each other. These bonds of love and respect were to be the foundation stones on which many, like Steve, would have built their own lives and families, be it in Kisumu or Kitale, Karen or Kilimani.

Life growing up in Kenya with its favourable climate, was so very special and enjoyable, with outdoor games like football, hockey, cricket and rounders , and indoor games like badminton, snooker, darts, and carrom. Other activities would have included athletics, gilly-danda, seven tiles, and marbles - not forgetting the many jam-sessions and card games. What about the safari escapades hunting for dik-dik and wildebeest, and of course the sizzling barbecues to boot??   Our favourite meeting places downtown would have been Tropicana, Rendezvous or Mocha Bar.
On the rare occasion when life got boring, there were the un-official lending libraries to enjoy western comics like ‘Kit Carson’ and ‘Buck Jones’ or Annuals like ‘Dandy’ and ‘Beano’!! .  It is no small wonder that sporting lads like Steve, I, and others would have spent more time outdoors than indoors in those nostalgic days.

My own friendship with Steve stemmed back from those days, both at school and on the playing fields. We were proud and privileged to have attended the famous Dr Ribeiro Goan School in Parklands, Nairobi. Like many of our classmates present here today, we completed our schooling in 1959. We had fond memories of those days and of our esteemed teachers – Mr Martins, Mr Tavares, Mr Britto, Mr Nunes and Mrs Jacques, Mrs Coutinho, Mrs Saldanha, and Mrs Lobo, all of whom were
Good in their chosen subjects.

I recall that in one particular year (possibly Form 2), Steve and I shared the same hard wooden bench, right at the back of the class (for obvious reasons). This meant that more often than not, we would be a definite distraction to each other, to the teachers and to other classmates around. One teacher in particular, whose first name was Dolly, (I do not remember her surname) was so affected by our shenanigans, that she eventually had to split us up during her class. On one occasion she also kept us back after class to lecture us on the attributes of proper behaviour in class, and that we had to feel shameful. We were so very shameful (for a while anyway) that the next day we gave her a box of guess what??
No, not chocolates or flowers but Dolly Mixtures. This brought a tear to her eye and all was forgiven and forgotten

I understand that neither Steve, nor his older brother, Sylvester, had second names. So someone,( God knows who), gave Steve a nickname CAITHO , based perhaps on his liking for the axe-like weapon, which in Konkani one would refer to as ‘Koitho’ !!  However,  Steve and I would often address each other differently – I would hail him as ‘Son of AP’ and he would respond with ‘Son of Tommy’  . My Dad’s  name was in fact Thome, which Steve evidently could not pronounce.

Talk of nicknames there were many bandied about in our school days – names like ‘ Putla, Kasaku, Goofy, and Mkamba- for the lads, and Crows Nest, Skoda Legs, Hockey Sticks, and Macho Eine for the gals. I would hazard a guess that it was Steve who invented these names for the individuals concerned - all in innocent fun of course. Such was his infectious sense of humour that it is not hard to believe that he belonged to a so-called   ‘Jokers Club’  Even his e-mail address was jokersteve @ hotmail .com

Steve, as you all know, was a great sportsman. Both he and I were members of the Dr Ribeiro Goan School Football team that included famous names like Gilbert Fernandes, Clive Ferrao, Alban Coutinho and Anthony D’Souza.  Steve, I believe played in defence; so not many could get past his beefy frame without incurring some bodily damage. Our
manager at the time was the popular teacher, Mr Roldao Menezes.

Being a tall strapping chap with a beady smile, Steve would have commanded a kind of aura and invincibility, especially in the presence of his many female admirers. One such admirer whose attention and eventual love he captured was a one-time model from a strict, respectable and sporting family. Her name, Marjorie Fernandes, whose brother, Alex, played for the Kenya Football team. Steve and Marjorie were married on 18th April 1970 – a sunny day I believe, but surely a sad
Day for Steve’s other female admirers!!!

My friends, lest I incur the wrath of Marjorie, I would now like to read out some comments from an account prepared by all the family, reflecting their heartfelt thoughts and memories of the many years of life with Steve, both in Kenya and here in the UK.

Our darling Steve was a dedicated family man who would go to great lengths to attend to the welfare of his wife, children, and more so of his grandchildren - Dylan, Nikita, Aaron and Leah- Gabriella,
(All of whom he absolutely adored).

-         He was very popular at Dr Ribeiro’ School, a keen athlete and captain of his school house St Patricks competing fiercely to win the annual inter-house Trophy. Just for the record, I was in the house of St David’s an equally formidable team I remember.

-         He was incredibly cheeky, and often got himself and his friends into trouble stealing fruit from neighbouring gardens, climbing up trees and throwing guavas to those below. He would often return home late  from his various activities,  only to face the music from his furious Mum, Maria, who sadly passed away following a road accident in 1966

-         Our wedding in 1970 was at the Holy Family Cathedral. The service was officiated by the late Fr Francis Comerford, who was the school principal at the time.

-         After graduating from Teacher Training College in Nairobi, Steve rose to great heights as Bwana Mwalimu at various schools, and later as a headmaster at Karen. At all these establishments he at gave his best and his outstanding talents were valued by teachers and parents alike. I wonder did he perhaps lecture his troublesome students on the importance of proper conduct in class!!!

-         After the family moved to the UK in 1991, Steve was to become well known and liked in the teaching community, particularly at
St Stephen’s School, Welling, where he taught for many years.  His services were so sought after that even after he retired officially from teaching, he was called back to teach at a few local schools. No doubt he was glad to get away from household chores at the time!!

-         He loved football and was an ardent Manchester United fan always engaging in fun and banter with his son-in-law, Paul, who happened to be a Liverpool fan. He was passionate about darts too and was a member of the famed ‘Rebels Club’ in Nairobi.

-          Steve was extremely generous and donated to various charities

-         Some of the happiest moments of Steve’s life were when his daughter, Jennifer, married Paul and son, Clifford, married Meera.
Those days must have been so special for the Fernandes clan!

-         He had an inherent love of music, in particular the music of the King (Elvis) -to whose hits he would often listen and sing along.
I often noticed that when in front of a mirror he would carefully comb his kiss-curl in an attempt to copy that of Elvis!! He also loved dancing, in particular the Jive, and would try to copy the steps of the maestro Rowland Rebello – unsuccessfully though!!

-         Steve loved talking about the ‘good old days’ - the various camping trips to Mombasa and Malindi, and the fishing trips with his buddies to Lake Naivasha’.  He loved  Nyama Choma, and Maindee, sprinkled with lemon and chilli powder, followed by a cold, refreshing Tusker beer.

-         Friendships played an important   part of Steve’s life and he would often telephone his closest friends like Skippy, Gilbert, Donald and Alvira, Edwin, William, Fatima and of course Yours Truly, all of whom apparently have now become Honorary Uncles and Aunts to his children. Falling in the same category will be Uncle Blasco Goes for his sterling help in organising today’s proceedings.

-         Our lasting memories of Steve will be his hard-working ethic and his will to soldier on (even when times were tough).  I would often speak to him in those days when he was ailing; and when I posed the question ‘How goes it son of AP? he would always retort with the answer ‘ not good my friend not good, what to do?
-a phrase that still echoes in my mind now and again.

-          I am given to understand that Steve and Marjorie sometimes dined out at two local restaurants and on each occasion, when Steve requested for the bill, he was informed that the bill had already been settled. Neither he nor Marjorie ever found out who paid those bills. This proves the point that he had friends in high places. However, thereafter Steve never went to those restaurants. It is my view that the money he saved on the aforementioned visits would have been invested in buying shares in Ladbrokes!!

Sorry folks - excuse me a moment. Must take this call!!!

Talk of the devil - that was His Lordship pleading with me to ‘get on with it!!! ‘Apparently I am keeping St Peter waiting to welcome Steve through the Pearly Gates. Can you imagine that – Steve at The Pearly Gates in such quick time? He probably avoided the Dartford Crossing and used the Bexleyheath Bypass instead!!

So people, time to bid farewell to the charismatic and enigmatic Steve, as he ascends upwards and onwards towards eternal rest and glory in God’s Heavenly Kingdom. There he will be re-united with his beloved parents, brother Leslie, as well as his former classmates, Frank Menezes, Anthony D’Silva, Mario Almeida, and Maximo Alphonso, to name but a few.

UNTIL WE MEET AGAIN ADIOS MY FRIEND, REST IN PEACE!! 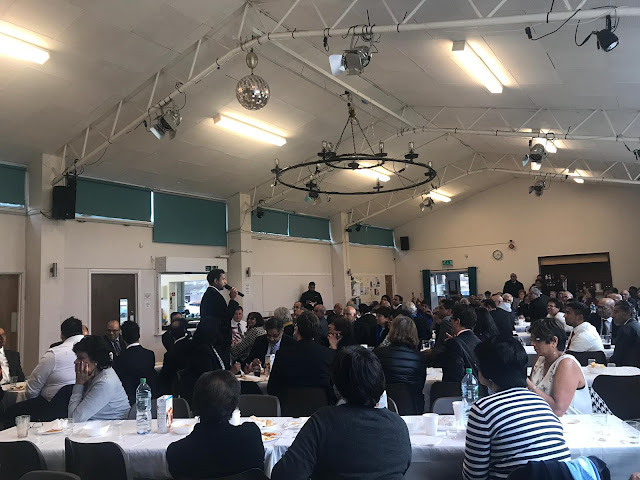 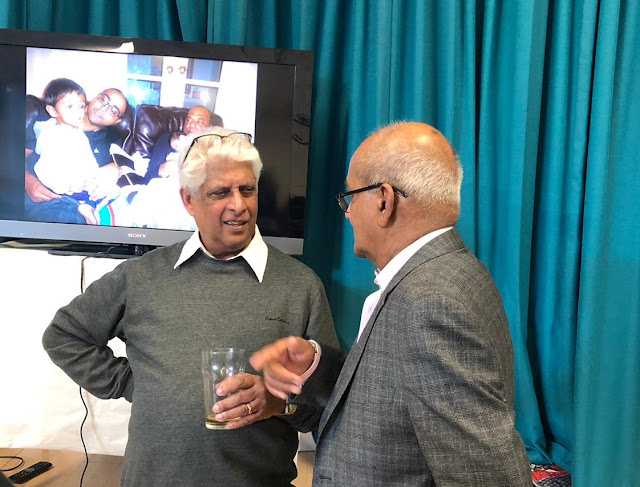 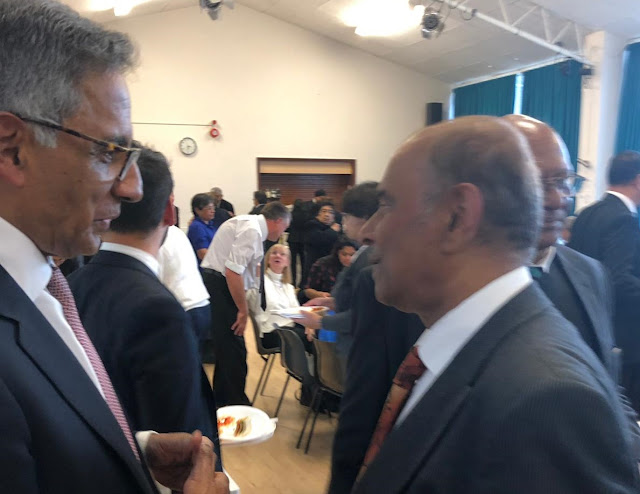 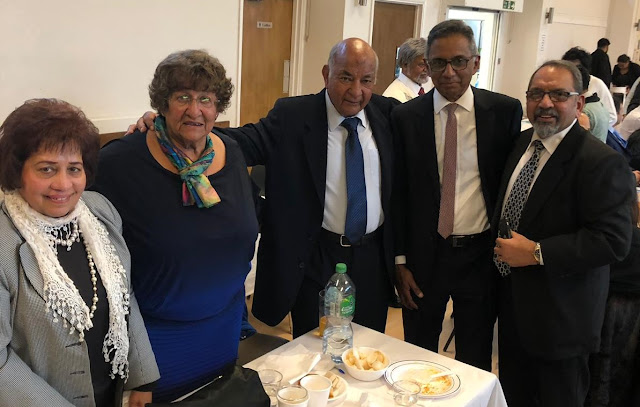 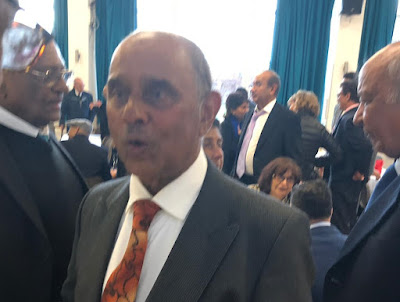