Death is nigh for Mombasa's historic newspaper Coastweek


I am in shock and I don't know when I will be myself again. I have just been informed that one of my favourite newspapers, at least its printed version, Mombasa's CoastWeek will cease publication after the final edition next Friday. It may be possible to be born again as an online publication. It never is the same.

It has been a pleasure writing for the paper for several decades. Its editor Adrian Grimwood and I began our careers at the Nation in Nairobi. He joined a few years after me and showed that he always enjoyed visiting the Kenyan coast. I think he spent a little time posted there as a reporter and it was not long after that he became the editor. Throughout the past several decades, he nurtured both the publication and the teams he has led with honour and dignity. Throughout his life, Adrian has been a star performer. He married Ulla, who just as delightful a person and a journalist as her husband. Together they make a truly formidable team.


Together they gave their all for the Coastweek. Both are very old school in terms of integrity, honesty, utter respect of the truth, intolerable of rumour or innuendo or gossip or the unsubstantiated story. It has always been a case of the truth and nothing but the truth. Adrian has always been blessed with a fun sense of humour, a love of the coastal outdoors, Kenya's wildlife in all its aspects, the people and the history of Kenya 's history, its sport icons, its business leaders and all the other beautiful things that are to found on this stunning coastline.

With the other members of the team, they have built a newspaper, a success to the Mombasa Times, a product of Kenya's coast era, that his readers have always been proud of. If the late Franklin Pereira was alive today, he would have probably tried to buy it and allowed Adrian and Ulla and the team to continue as business as usual.

The Coastweek will be buried with the human parts of thousands of past readers who stories and photographs it published: their successes, their failures, their births, their deaths ... all of the human endeavours which collectively is a cyclopedia, or several copies, of the Coast. In a way in its death, much of the coast will die with it.

My heart is filled with sadness. The grieving process begins next Friday. Coming to terms will take a long, long time. Many thanks to all my friends who made the Coastweek possible. Never forget you. 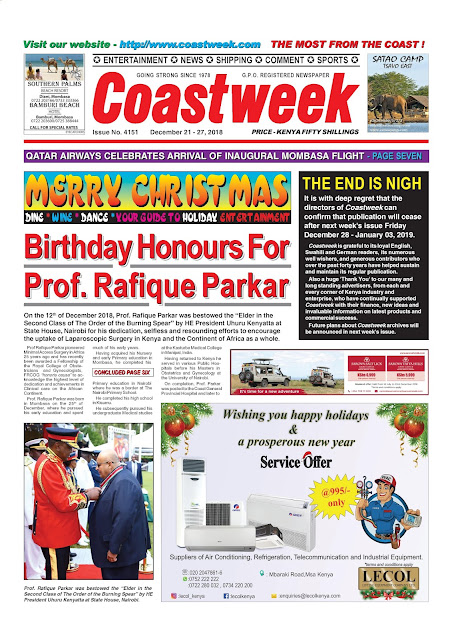