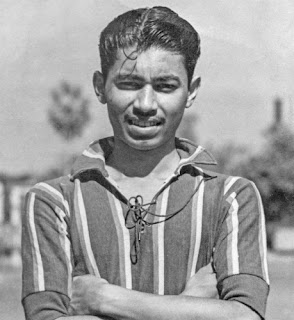 ALMEIDA, Fenelon "Fenny" Jesus Fenny passed away peacefully with family by his side on Tuesday, October 16, 2018, at the age of 93. Loving husband of Adelaide "Dela" for 62 years. Devoted father of Gina, Stanley and Kamla (Luke). Cherished grandfather of Wendel (Erica), Ruth and late Eric, and great-grandfather of Felix and Leo. Beloved brother of Yolanda and Alves and predeceased by Gangi and Bossuet. Fenny's memory will always be cherished by his nieces, nephews, extended family and friends. Fenny was born in Dar es Salaam, in the British-administered Tanganyika Territory (present day Tanzania), where his family owned a large farm. Their origins, however, were in the Portuguese colony of Goa, now a state in India.

Fenny divided his childhood and youth between Tanganyika and India, where he discovered his passion and genius for sport at St. Xavier's College in Bombay (now Mumbai). He was captain of the college's soccer team in the 1940s and went on to play for the Tata Sports Club. He was also the captain of the Goan Sports Club in Bombay. Fenny was much celebrated for his soccer prowess. Although physically small, he was a wizard on the pitch, winning for himself sports page headlines in India and Africa and the nickname "Mighty Mouse".

Upon moving back to Tanganyika (Tanzania) and marrying Adelaide Noronha there in 1956, he played in many field hockey tournaments and served as the treasurer and secretary of the Tanzania Olympic Committee, organizing international meets to help season the athletes. Fenny was an international level umpire in field hockey – both in Tanzania and after coming to Canada in 1973 with his wife and their three children. He and his family settled in the Toronto region where he worked for decades as an international customs broker.

He was also a Sports Secretary for the Goan Overseas Association in Canada, where he passed on his love of sport to family and friends. Fenny also had a lifelong love of music. He enjoyed leading sing-alongs and caroling at family gatherings, often using his harmonica to set the tune. In retirement he remained socially active and made sure to regularly check in with friends and family around the world. He also stayed engaged with sport, watching hockey, baseball, golf, tennis, football (soccer) and cricket whenever possible.

More recently, Fenny and wife Adelaide moved to Ottawa to be closer to their grandchildren. He was delighted by the recent birth of great-grandsons Felix Fenelon and Leo. A Funeral Service for Fenelon will be celebrated in the Chapel at Kelly Funeral Home on Saturday, October 27, 2018 at 12:30 p.m. Friends may pay respects at: Kelly Funeral Home – Kanata Chapel, 580 Eagleson Rd., 613-591- 6580. Interment to St. George Cemetery (3924 Russell Rd.) for 3:00 p.m.

Condolences and sharing memories at: www.forevermissed.com/fenny-almeida
As published in The Star newspaper