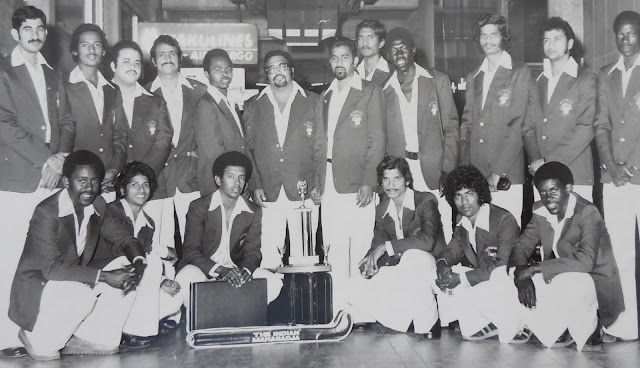 BAOBAB HOCKEY MEET IN SANA TOURNAMENT
AFTER 40 YEARS OF WINNING THE GOLD CUP –
By Said Mbarak Al Digeil
The weekend of 20/21 October will witness a large gathering of hockey fraternity in Mombasa. It will include ex-players and their families coming from all corners of the world – Canada, Dubai, Seychelles, U.K and the USA - to join those in Kenya for the 40th Anniversary celebration since Baobab Hockey Club became the only Club at the Coast to win the much coveted MR De Souza Gold Cup. The tournament is the culmination of efforts of the organising committee led by the Olympian Raphael Fernandes and various sponsors, notably the Ex-CHA/Baobab Secretary and national goalkeeper Said Mbarak Al Digeil who provided trophies and medals during all the tournaments of the past eight years
Hockey is a popular game in Kenya and is hugely played at various levels in schools and Clubs. Kenya was an Olympics playing nation for a very long time, and had at one time, reached the semi-finals of the World Cup in the 60’s
At club level, hockey was largely dominated by two communities - Sikhs and Goans - who competed for all the major trophies in the Country. This trend was interrupted when Baobab Hockey Club was formed in 1974 by employees of Bamburi Cement Company - The Late Angelo DeSouza (Chairman), Albert Diniz (Vice Chairman), Said Digeil (Secretary), Alfie DeSouza (Treasurer), Iftikhar Malik (Captain).
The Club hailed National Players for the Kenya team that included Late Reynolds Pereira (Olympian), Raphael Fernandes (Olympian), Said Digeil, Randiek Nashon, Patrick Martins, James Braganza, George Ochieng and Michael Katana. Indeed Raphael and Said individual outstanding performances were awarded the Kenya’s Hockey Player of the Year for 1978 and 1979 respectively.
Hockey being a team game also produced some outstanding players in their own right. It included Tony Castanha (the scorer of the lone goal in Gold Cup win), Tom Bockle (popularly referred as the machine of the team), Randiek, Mwinyi, Omprakash, Victor, Joash, Hamid, James, Harish.
Baobab made overseas trips to Germany, UK and Canada. The team had the high honor to play an exhibition game for his Excellency President of Kenya, at his Kabarak Home.
Apart from the Gold Cup, Baobab won most of the local tournaments, as well as the Kishan Singh Cup in Nairobi and Mapinduzi Cup in Dar es Salaam.
The Club success is also credit to the supporters and well-wishers of the club. Baobab will always appreciate the unconditional support given by the Late Hardev Singh Kular, Pindi Tamana and Dr. Sur, through their respective KHU and CHA.
Perhaps two individuals are worth mentioning who made immense contribution to the team success and spirit that prevails to this day.
Bamburi Cement were the main sponsors of the Club. The Company Managing Director, Late Mr. Roberts was a big supporter of the club, whose encouragement and financial support, motivated the team to attain high honors. The performance and the discipline of the team pleased Mr. Roberts and Bamburi management and the impact this had on the overall Company’s contribution to corporate social responsibility.
However, much of the credit for the success and keeping the team disciplined, was the personal effort of the Manager, the Late Agnelo DeSouza, popularly known as Sana. This weekend will witness the 8th Edition of the Tournament in memory of this great manager. The annual event will this year reach its peak when teams from all over the Country will be meeting to compete for the Trophy and to enjoy the Saturday night Reunion Swahili Dinner.
Sana was the face of the Club. Sana’s management style managed to keep the team together, sorted problems between players and attended to any special needs for the team. He was indeed the driving force for Baobab to win the very many trophies. Apart from Baobab, Sana also managed the Coast and National Teams
During the next weekend, Baobab will be celebrating the past glories and triumphs, and will reminiscence the nostalgic days to renew the Baobab spirit. Baobab team has been closely knit together and are in regular contact through the various social platforms. No doubt, the past has bonded the team together in a way that the individuals see themselves as one family.
The weekend will be an opportunity to remember the team’s fallen heroes, Sana, Reynolds, Zahoor, Shabaan, Joab and Raymond. Their departure will be missed immensely.
Sana’s daughter (Maureen) who has grown with the team since birth, continues to shine the light on her father’s behalf.
To quote Iftikhar Malik, a founding member and the first captain of the team, “little did I imagine one day after 40 years, we will get together for a reunion of our players and supporters who have been moved to different part of the world. Just goes to show our love for each other”