WITH the establishment of the Imperial British East Africa Company, the port and island of Mombasa became a vital gateway to the unexplored and undeveloped riches of Kenya and Uganda. It was also the starting point for the Kenya-Uganda Railways and Harbours. Towards the end of the 19th Century there were already a number of Goan merchants as well as civil servants in the British administration and the mercantile service.

Out of those, a few men founded at Mombasa, on November 1, 1901, the Goan Institute, the pioneer institution for all others that would come after through Kenya, Uganda, Tanganyika and Zanzibar. It was actually called the Goan Reading Room and was housed in rented premises in Ndia Kuu (it still existed in 2001) for Rupees 20 a month. The name chosen suggests that the members were keen to spend their leisure hours, after a hard day’s work, in reading as a past-time.

As the activities of the Institute increased, it was suggested the name be changed to “The Goan Association” and later to “The Mombasa Goan Institute”. The “Goan Institute” was adopted by an overwhelming majority.  However, in 1920 there was a move to change the name to “The Indo Portuguese Institute” which did not succeed. The final change came in 1963 when Kenya gained Independence and “The Mombasa Institute” to all of good repute.

As the membership grew, “there was a longing own a building in a suitable locality amidst the beauty and healthy surroundings. They were dreaming of a new building with a spacious hall for social gatherings, debates, weddings, lectures and space for a secretary’s room, indoor sports and open courtyard to facilitate tennis and badminton (badminton could also be played in the main hall)”.
A Special General Meeting on March 14, 1917 decided:
To petition the Government with a view to securing Crown land.
A deputation was to seek an interview with the then Sheikh Ali bin Salim for a gift of a plot of land.

Captain Sir Ali bin Salim was born in Malindi around 1860 and he was about 80 years old at the time of his death. The many tributes paid at the time of his death indicated just how much this man was loved by all who knew him or knew of him. “The life of Ali and his influences were not restricted to racial boundaries because he was a benefactor to all communities.”

He became Liwali (local ruler in Arabic) of the Mambrui in 1891 in the service of the British East Africa Company, at a time when his father was Liwali of Mombasa. In his special affection for the Goans of Mombasa, Sir Ali donated to the institute a sword, his most precious possession to be held in trust forever.

It took a lot of dogged determination to overcome some of the disappointments as the leadership of the Institute pursued the dream of “owning its own home”. Their dreams came true on July 25, 1923, when members were told that the Liwali had offered a plot of land to the Institute as a gift in perpetuity inalienable and not to be used as living quarters. Two sites situated on the present Nyerere Avenue were offered. One site was next to the Manor Hotel and the other where the present building stands.

The foundation stone was laid on November 1, 1926, the year of the Institute’s Silver Jubilee. It would take about a year for the building to be completed. The inauguration by Sir Ali bin Salim on November 12, 1927.

The land adjoining the Institute in the East, consisting of two plots where subsequently the tennis courts were built, was taken in 1928 on a 99 year lease from Sir Ali at nominal rent which was further substantially reduced, and in 1938, after being approached by some members, Sir Ali agreed to cede the land freehold. A further small plot of land was acquired at a nominal rent.

As the membership continued to grow so did the pressures on the need for an extension to the existing premises and a Building Fund levy of Five shillings was introduced.The foundation stone to the new main hall was laid by club president Valu de Abreu MBE (he was to go on to become president 11 times, the most by a single person), on November 9, 1957. An overdraft was applied for and approved by the bank but it was not possible to collect this for want of guarantors. At the end of July, 1958, Dr E.B. Figueiredo, A.B. Rego and M.A. Vianna duly signed the requisite documents as guarantors and the money was released. During the construction, P.H. Saldanha loaned the Institute Shs 70,000. Members also subscribed for debentures in units of Shs 200 and some members became “Extension Founder Members’ by paying the fee of Shs 200.

Great difficulties were faced in meeting the payments to the contractors and club president  Valu de Abreu used to go house-to-house collecting donations and subscriptions to debentures.
On Easter Sunday, March 29, 1959, club president Mr Abreu was given the honour of officially opening the new hall because of his unstinting dedication and sacrifices to see the project to completion. More than 1000 people attended this function.

In 1976, the Institute celebrated it Platinum Jubilee with the great aplomb.

In 1979, plans were approved to convert the foyer, the bar and terraces into offices as a commercial venture and to have the bar, store and kitchen in the old building. The basement was converted to offices and boutiques with a high rental value.

In 1991, the late Franklyn Pereira, who many, many people would consider one of the greatest sons of the Institute had a vision: to move to the sports ground by building a new sports complex and have all the Institute’s activities under one roof. The old premises would be rented. The vision became a reality when Franklyn obtained 45-year leases on the sports ground which was on temporary annual lease. Soon well-known architect and Institute member, Patrick Martins, was charged with preparing the plans for the new complex.

In 1993, plans for the complex were approved and construction contract was awarded. The tennis courts were sold a company formed by members of the Institute for five million shillings and money was put into the building fund. Dr J.M.E.  Pinto was appointed chair of the development committee. Franklyn Pereira laid the foundation stone on March 5, 1993 and Dr Pinto performed the opening ceremony on April 2, 1994. The MI sporting complex and all its other property will forever remain a monument to the dedication, foresight, vision and all that Franklyn Pereira stood for in life.

The Institute continues as it is its tradition: improvement, innovation, changing to meet its members’ needs, always true to its traditions, always.

This is an edited version of a compilation by Felix Da Costa for a brochure marking the Institute’s Centenary.

Sir Ali bin Salim’s sword
The sword had been presented to him by George Acuilar Lawrence and Colonel E.T.H. Hutton in gratitude for his courage, resource and sympathy evinced when their brother Captain Frederick Eyre Lawrence of the Rifle Brigade was shot in a skirmish at a place called Mgobani on October 16, 1895 while on special service. Sir Ali was also made a patron of the Institute. 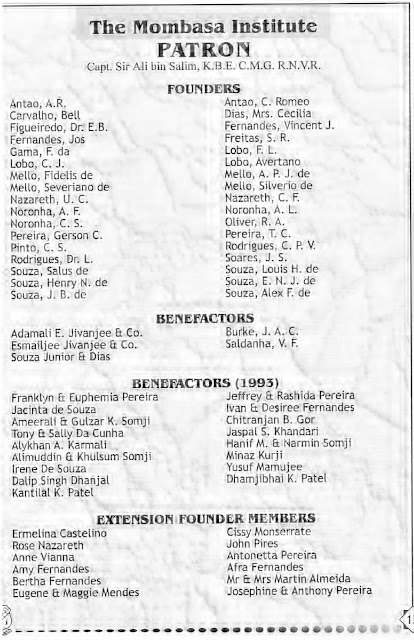