The legend of Egbert Fernandes 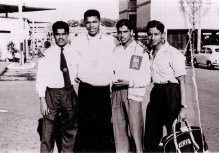 Egbert’s eulogy: No egg, no bacon

Basher Hassan, one of the best, always!

Basharat   (Basher) Hassan As a kid growing up in Eastleigh and its environs in Nairobi, Kenya we had our own sports heroes but it was no ...