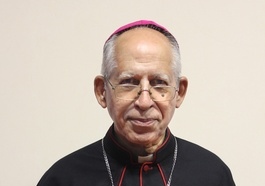 By Marci Pereira (April 2017) as part of the Project: Archiving Memories of Mombasa Goan School.

An Icon to my mind

Bishop Agnelo Rufino Gracias, ranks high amongst that notional, ‘Exclusive Club of Mombasa Goan School Luminaries’, as per my research.  He is the first of three school ex-students I am aware of, that appears to have had opted for the Priesthood.  The other two being Michael De Souza who joined the Fransalian Order and Leslie Coutinho who joined the Jesuits – all three in India.  I marvel at Agnelo’s astounding accomplishments and the profound impact he has made in his apostolic ministry ~ this Bishop, my former Makadara boyhood, play-mate.   To have risen to the status of “Auxiliary Bishop of Bombay” was for me, as for all fellow Makadara Goans of the day, an immense occasion of pride, joy and thanksgiving.  To this day, he is still jealously remembered by Makadara Goans, as: ‘One of our very own’.  And so, it is with the Mombasa Goan School and the Mombasa Catholic Community too.

I can still sense that buzz of high elation that transmitted through our Makadara Goan Community, when Agnelo’s ordination to the Priesthood was announced in 1962 and the excitement it generated in our circles, in witnessing him celebrate his very first Mass at the Holy Ghost Cathedral, Mombasa, on 23 December 1962.   The fact that I still have his celebratory holy-picture, that was issued as a memento on that occasion, on the cover of my working file to this day, shows my high regard and respect for the Bishop. (A copy of that holy picture is reproduced herein).  If I heard someone mutter: “What good did ever come out of Makadara?” Well, he is one.

Memories of his boyhood

Agnelo was born in Mombasa on 30th July 1939.  I presume, like so many of us boys, he will also have attended the “White Sisters Convent School” until the age of 10/11, when we had to transfer to another school for secondary education.  Many of us moved over to the Mombasa Goan School.  Agnelo went on to complete the Senior Cambridge School Certificate, at the Mombasa Goan School in 1953.

He always struck me as being very studious, someone who took his studies seriously.  I remember him as always being loving, mild-mannered and courteous, qualities that endeared him to all our families and mates.  His extraordinary devotion to the Catholic faith, stood out very early on, amongst the boys.   The ‘Holy Ghost Church’, as it was called then, used to draw quite a few devotees for daily services from Makadara.  Those loud peals of that distinctive church bell echoing in our direction, was an unmistakable reminder of ‘God’s calling’ it seemed.  The Gracias family, were regulars in this lot, as were the Pereiras’, the Gonsalves’, the Monteiros’, the Fernandes’, the De Souzas’, the Mascarenhas’ etc.

I still hold vivid memories of the young Agnelo, armed with, what seemed like a ‘voluminous’ leather-bound Daily Missal in hand, walking briskly diagonally through the Makadara Park after morning Mass.  That short-cut to his home, was regularly used by other town-folk who lived in that direction. Remember the Makadara Park?  That was the park with the circular band stand, with a rotund roof and circumferential steps leading up to the platform.  When not in use as a band stand, it was a great place for kids to play around safely, especially on Sunday evenings, with their parents squatting leisurely close by.

Up to today, my enduring memory of Agnelo, as a boy, was his love for football.  That image of him, soon after he finished his Cambridge School Exams, is so colourfully etched on my mind.  That was the time between him awaiting his results and sailing off to seminary, in Bombay.   For many of us Makadara boys, our playground was the “Stella Maris Club”, immediately behind, and located within the Holy Ghost Church grounds.  It was as good as an extension of our neighbourhood.  On days when there were no evening church services on, the Stella Maris playing field was alive with boys eager for a robust and energetic kick-about, quite apart from those that fancied table-tennis indoors.  The numbers were often sufficient to select two lively competing teams.

Now, somebody had to be responsible for ensuring there was a decently inflated and well-maintained leather football, available for play.  Whose role was that?  Who else? Me.  Kidding aside, this was serious stuff, because I was conscious that if there is no ball, there is no play.  Imagine the disappointment if there was no ball? After inflating it to the right pressure with a bicycle hand pump and ensuring the tie-lace was sufficiently tensioned, my regime was to rub candle wax into the stitching (and the leather) of the panels.  That was to ensure a prolonged life for the ball.  Soon after that ‘polish treatment’, it really was a big temptation to give the waxed ball, the first whack.   I loved the sight of seeing our mate Agnelo turn up at our house, around play time, infused with such excitement, take charge of the ball, grab it tightly under- arm and along with Flavio, his brother, myself and my brothers, and anyone else whoever was there, march delightedly towards the Stella Maris ground.  What a lovely and delightful memory that remains for me.  I missed that playful ‘passion’ when he sailed off to Bombay in 1954.  So much has happened in the 64 years (!!!) since then that I will not be surprised if the Bishop hardly remembers any of this.  We have not met since.

Off to Seminary & Ordination to Priesthood

Agnelo’s leaning towards the priesthood will have undoubtedly have emerged during his family life at home, with perhaps some influence from his attachment to the church and probably, in a small way, the school.  With no seminaries in East Africa at that time, those opting for the priesthood would go to Rome; the UK; Ireland or India.  Agnelo was admitted to the Bombay Diocesan Seminary and left Mombasa in 1954.  The history of this seminary has three specific periodic phases, defined by its physical location in Bombay, as follows:

Bishop Agnelo, having joined in 1954, had spells first in Parel and then St Pius X College, Goregaon, where he was ordained as a Priest on 21st December, 1962.   He celebrated his First Holy Mass at the Holy Ghost Cathedral, Mombasa on 23 December 1962.

[A full historical listing of Bishop Agnelo’s impressive appointments in his vocational ministry is presented in a tabular format in Section (g), below].

Appointment as ‘Auxiliary Bishop of Bombay’

Further to accomplishing a Doctorate in Spiritual Theology in Rome (1971-1975), Father Agnelo took up a Professorship at the St Pius X College, in Goregaon, Bombay.  In 1985 he was appointed the Rector of St Pius X College.  In 2001, he was elevated to the rank of ‘Auxiliary Bishop of Bombay’.  His ordination as the ‘Titular Bishop of Molicunza’, was conducted by Cardinal Ivan Dias on 21 April 2001.

After his ordination as a Priest, this appointment as a Bishop, must surely feature as another very proud milestone for Agnelo, his family and the Mombasa Goan Community.  I know the Makadara Goans were abuzz when the announcement was first released.  This was truly a momentous day for so many of us ~ a Bishop of a city, as renowned as Bombay, with a population of over 16 million, of which, Catholics numbered half-a-million then, somewhat puts that elevated status in the archdiocese, into perspective.

Humilility exemplified
For me, a statement of his profound humility is best summarised by the following account.  When I worked in London around 2005/06, I used to visit Mr and Mrs Joaquim Monteiro, at least once a month, before commuting back home to High Wycombe.   The Monteiros, our very good family friends, formerly from Makadara, Mombasa, lived near Ilford (Greater London).   Being senior citizens, (Mr Monteiro was 98!!!), I recall how eagerly they looked forward to my visits.

On this one visit, they were both most anxious to relate how much over-awed they felt with an unexpected visitor ~ none other than ~ Bishop Agnelo Gracias, who was in London and made it a point to go and see them.  The Gracias family and the Monteiros, were almost next-door neighbours in Makadara.   Mrs Monteiro, a very good cook, quickly conjured up a meal for their distinguished guest and his brother, Flavio.

On taking his leave, the Bishop, stooped down before Mr Monteiro, with ‘praying hands’, seeking his blessing ~ a traditional custom during our upbringing, as a mark of respect for the elders.  Mr Monteiro would have nothing of it and insisted stubbornly, that the blessing should be in reverse.  This account is from the mouth of Mr Monteiro himself.  They felt so honoured that they should be visited by a Bishop: “One of our very own”, as described earlier ~ in their case, someone they witnessed, almost daily, grows up in their neighbourhood.   That exceedingly humble gesture by the Bishop moves me to this day.  My mind flicks to thoughts of him every time the following line appears, whenever singing the hymn: “As the deer pants for the water …. by Martin Nystrom”, at our church.   The line? “You’re my Friend and you’re my Brother, even though you are a king”.  The Monteiros would certainly endorse that.

Casting an eye through the listing in the table above, Bishop Agnelo strikes me as an outstanding Theology academic, borne out by his Doctorate in Rome, followed by the two stints as the Rector of St Pius X College (his alma mater).  He will have impacted on so many Seminarians during his years of leadership of the College.  Likewise, in his spiritual and pastoral ministry, he will have touched countless lives through administering the holy sacraments, his advisory role and guidance, counselling, attention to the sick, poor and needy in the community, driving educational advancement, community progress and well being, etc.

Member of that renowned ‘Gracias-Name’ Pedigree

The ‘Gracias’ name appears to carry high prominence in the history of the Bombay Archdiocese hierarchy.  The first ethnic Indian, to be appointed Cardinal of Bombay, was Cardinal Valerian Gracias, who made a big impact with Catholics in Bombay and Goa.   The current Cardinal of Bombay is Cardinal Oswald Gracias and with Bishop Agnelo Gracias, all one-time residents of Bishops’ House, I know many in our community who get confused on who is who.   Although, probably not related at all, the ‘Gracias Name’ has certainly left a lasting historical memory, especially with Goans, in general.

I feel great pride that our ex-student, Agnelo Gracias, stands amongst that select group of residents of Bishops’ House in Bombay.  The Bishop, I proudly remember as my playmate, schoolmate, family friend and now brother in Christ. 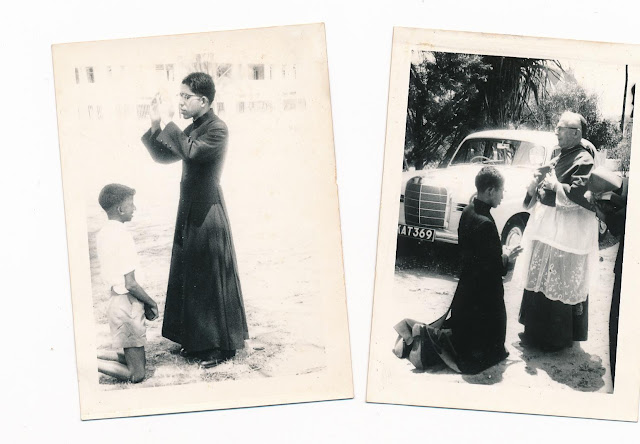