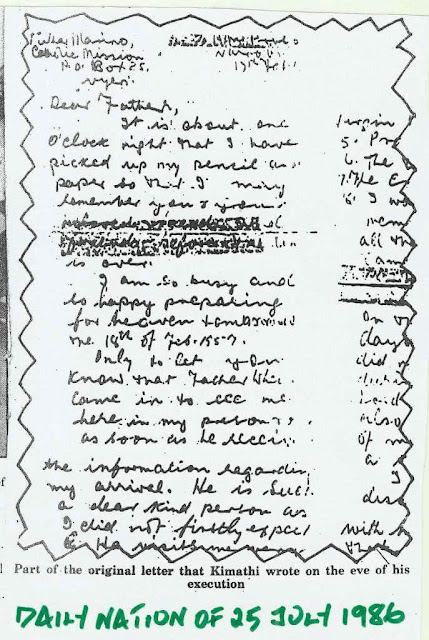 The last letter Dedan Kimathi wrote before being executed on 18th February 1957:

The accompanying image/letter/attchment dated 17th February 1957, published in the "Daily Nation" of 25th July 1986, is said to have been written by the penultimate military commander of Kenya’s “Mau Mau” Rebellion Dedan Kimathi, and appears to have been written just hours before Kimathi was executed in Kenya on 18th February 1957. The letter is addressed to one Father Marino of Catholic Mission, P.O. Box 25, Nyeri, Kenya.

A typed copy bearing the contents of the accompanying image/letter/attachment was on display at the Kenya National Archives public gallery in the 1990s, since when it has been removed. However members of the public, on request, can get a typed copy of Kimathi’s said accompanying letter/image/attachment at the Kenya National Archives. According to the “Daily Nation” of 25th July 1986, the original letter is kept in Rome, Italy, at the Archivio Generale of the Instituto Mission Consolata.