Of all the wonderful people who graced the Konkani (Goan) stage in East Africa, one name will stand out forever: Jack Tiatrist (actor, comedian, singer, song writer, dramatist … and lots more).

The first time I heard his name was when a group of “my aunties” (every woman was an aunty, and every man was an uncle, in those days) were discussing with quite a lot of hilarity and happy banter the comic antics of a chap called Jaak! My uncle Mary had been taken by her husband uncle Custodio to the Nairobi Goan Tailor’s Society for the latest locally produced and presented “tiatr”, the Goan version of theatre in Konkani. It would seem, these tiatrs always included a couple of comedians who could sing and dance a bit. As comedians, they were often the real stars of the show.

Sadly as a young boy growing up, I had virtually no interest in this wonderful art-form. It remains a bucket list regret. My friends and I were happily into western cinema and music and not many Goan boys and girls of my age spoke Konkani. I was the exception, however, I spoke it fluently with my mother and with all the uncles and aunties I came into contact with.

It was not until I was well into my teens that I first came into contact with the eternally smiling (Jaak) Jack “Tiatrist” Fernandes. Quite a few of my friends, among them the late Bertha Zuzarte and her daughter, the late Alzira, Minguel Fernandes, the late Joe Spider, Mario and the late Bella Simoes and many others kept the flame alight.

Tiatr was the biggest community entertainment before television and it survived for many years after the advent of the electronic media. In those early days, Goan entertainment included religiously going to church, the club for sports, tombola/bingo on Saturdays, day functions on weekend holidays, card games, birthdays (not so big), weddings, family gatherings, Goan feast celebrations and, of course, fishing and picnics and this and that. Happily tiatr  it still flourishes in Goa and the UK, especially with the new Goan colonies of Swindon and Wembley.

All the young people involved in tiatr in Nairobi were in awe of Jack. Alzira once said of him: “He is the most lovable and funny mentor ever.” Jack was always there to give a struggling artist a hand at any time.

Many have fond recollections of Jack Fernandes and just the thought brought a smile to their faces. Always jovial, always smiling, always comical yet always gentle. His popularity and openness ensured so many knew so much about him and the wonderful life he lived.

Joaquim Vincent Fernandes was born on the 13th of August 1933, in the village of Cansaulim Goa to Pedro and Angelina Fernandes. He was the second last in his family of three sisters and one brother.

Joaquim grew up to be a handsome, sporty and talented youngster. In his young age his flair for acting and singing emerged and it was not long before, as a young 9-year-old, he would grace the stage at many concerts in Goa.

In 1952, aged 19, he travelled from Goa to Kenya to join his father who was on a working assignment in Mombasa. He came by steamer and during the long 17-day journey, upon the insistence of many, he was requested to sing for the guests during dinner. As if that were not enough, he would then be requested to go from cabin to cabin, to provide similar entertainment.

Within days of reaching Mombasa, he was called on to perform at his first Konkani concert in Kenya. It was here that Joaquim acquired the stage name JACK, a name that then stuck for the rest of his life.

Not only was he a talented entertainer he was a prominent sportsman and it was not long before the Boy-from-Goa was winning most of the sprint events at the athletics meetings. He would later on be part of a formidable 4x 100 relay team, that included the legendary Seraphino Antao - the first Kenyan to ever win a Gold Medal at the Commonwealth Games. (See picture attached– Jack front second right, Seraphino – extreme Right) His talents were also found on the football field where his speed and trickery earned him a place as the right-winger on the Coast Select team (see picture attached – Jack – Extreme Right) 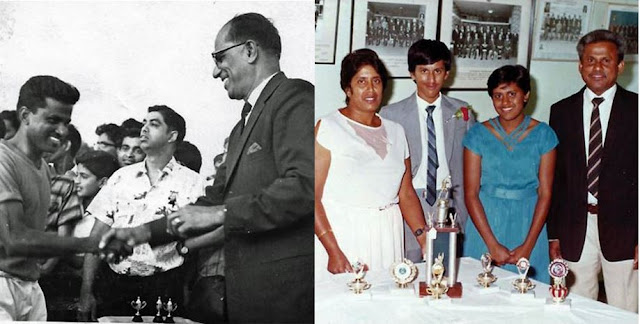 Jack worked for the Kenya Post and Telecommunications at the telephone sales section. His afternoons were spent on the sports field and his evenings were spent on stage. To supplement his singing talents, he took up drumming and was part of the popular band known as The Amigos, who performed at many prominent Mombasa Clubs. Jack, continued drumming until he was 80 and was often part of the choir, on his drum-kit at masses celebrated by the Goan community, in Nairobi.

Jack would always say that his salary went straight to the bank, and the money he earned through music ensured he led a comfortable life. He would save enough to travel back occasionally to his beloved Goa.

In the 1960’s Jack was posted to Nakuru and it was here that he met Olga Fernandes. In 1965 they were married in Nairobi. If Jack was known for his sporting and acting talents, Olga was renowned for her kindness and compassion.

Having moved to Nairobi, Jack the Tiatrist was quickly assimilated into the Management Committee of the Goan Institute, Nairobi. He served in various capacities including Dramatics Secretary, Catering Treasurer and Social Secretary. The GI was always a big part of his life. He currently holds the record of having served on the GI Management for no less than 18 terms. During most of this time, he worked at the Nairobi Hospital where he served as Chief Cashier for 23 years.

Jack loved singing; his home was always filled with music. However, it was not a radio or a CD player, it was always Jack singing or whistling. His tunes would range from Fat’s Domino’s Blue Berry Hill to Lorna’s Tuzo Mog … the variety was endless... Jumping Jack, as he was affectionately known, had the enviable distinction of either signing or acting in every Goan Theatrical production in Nairobi over the last 50 years. He only had to walk onto the stage and the audience would be laughing. He composed hilarious songs and his comical antics always had the audiences in stitches. In 1978, performing at the Goan Institute, having just sung his own composition Kung-Fu Fighting, the audience could not have enough. With the repeated shouts of “Encore, encore!!” the hundreds gathered did not let the next act go on, until he came back on stage for a repeat performance. It did not stop there; he had to perform the song SEVEN times before the rest of the concert could continue.

Quote from his son Ian : “I was only 11 years old and after most of his performances I would often run backstage to carry his small suitcase and walk alongside him as he came out. As many would run up to congratulate him I would ensure I was right beside him so that all would know that I was his son. I was extremely proud of my father”.

Jack could never sit in one place; the title Jumping Jack suited him. If it were a feast or a dance he would always be the first on the dance floor. He would waltz with the elderly, do the cha cha cha with the not-so-old and he would boogie with the young. Jack loved fishing and it wasn’t just the sport – he loved eating the fish he caught. If he were going fishing he would not sleep the previous night. He would then come home and immediately deep fry the Tilapia till it was crisp. He would go on to eat it, and not a bone would be left.

Jack was very keen about his appearance, his hair had to be perfectly brushed, his moustache perfectly trimmed. Besides his hair greying, Jack never seemed to age. Many would say that he looked the same 50 years ago… and that made him very proud. Meeting somebody for the first time he would often ask “How old do you think I am” and when they replied 68-69, he would smugly say “Actually, I am 81 years old”. He ensured he remained fit and although aged 81, he would do a 3km brisk walk every single day.

His energy levels, his smile, his laughter were the envy of many. He lived life to its fullest and it is no wonder that many were shocked on the 29th May 2015, when he passed on.