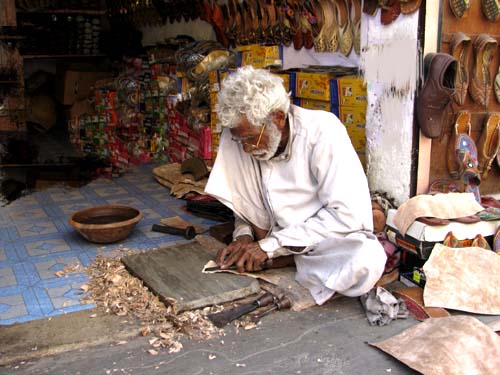 THE INDIAN COBBLERS OF
EAST AFRICA
By Kersi Rustomji

While Bata was ubiquitous in later years, early Indian cobblers created all the footwear in East Africa. Every town had its lone cobbler family. The cobbler worked on the verandah of the front room of their shop-cum-home.
A flat square cushion on a 'guniya' a gunnysack on the floor was their seat to squat on. The leather crafting tools lay within easy reach as did an old battered aluminium 'sufuria,' cooking pot, with water to soften the leather for cutting, stitching, smoothing, and a very smooth black granite piece was at hand, to sharpen the half moon leather cutting and trimming knives, and the hooked stitching needles. Nails, hammers, stitching string, and needles lay near an old tin that contained homemade blue coloured lye. A ball of wax was at hand to apply to the stitching needles for easy penetration of the leather.
A variety of leather rolls lay in a wooden chest nearby. A thick red covered ledger book that sat atop the chest was the order book.
Ichoo Mochi was one such cobbler.
Ichoo the Cobbler of Mwanza, in the then Tanganyika now Tanzania, was the town shoemaker.
To get any footwear, men's, women's, and children's one arrived at Ichoo's and after the, 'અરે હું ખબર છે. આ હારો  ર્હાર્દ બહુ પડ્યો ને!'
'Aare what's the news? Aare the bugger rain is very heavy, no!' Or else, some other local topic commented on, before the business commenced.
A discussion on the type of footwear one wanted ensued. In course of this general exchange of styles, type, and colour of leather, Ichoo, or his ‘aashishtent,’ assistant, rose from the squat, smoothed his greyed white pyjama pants and the untucked shirt, also quite grey from use, and disappeared in the room at the back.
A few minutes later, he emerged with a thick, very dog-eared shoe styles magazine, which had seen better days in some English shop. Used for years it always showed the, ‘letesht eeshtaeel letesht,’ latest styles, according to Ichoo.
From the description by the customer, Ichoo flipped the pages to find the closest match, and handed over the magazine. The customer looked at the picture, flipped more pages back and forth, and after the pros and cons of various styles were entered into, one was chosen, often with a few modifications by the customer.
Ichoo returned to his squat and opened the thick red covered ledger book. He turned to an empty double page, as the customer removed the shoes.
First the right and then the left foot was placed on the ledger book, and both were traced on each page. The customer name and date were entered in one corner of the page, and the price as well the delivery date written.
Some days later, at least three 'fitting' visits followed. During these, various kinks, tightness, or looseness, noted next to the outlines of the two feet, and another fitting date given.
During the ensuing fitting visits the invariable, 'અરે રૂસ્તમજી, જરા કાલે હાવજોને. આજે હારુ બહુ કામ છે.'
‘Aare Rustomji, please come tomorrow, bugger today have many jobs,' was not uncommon.
The next day the fitting done, problems again noted in the ledger next to the foot patterns, and a new date for delivery entered.
The wise customer never went on the new nominated day, for he knew his Ichoo. Therefore the customer arrived on a third or fourth day after the new date, and was greeted with,  ‘અરે હાહેબ, હું થયું? તમે મોડા થયા છો. તમારા બૂટ તો તયાર છે!'
'Aare sahib, what happened? You are late. Your boots are ready.' The customer was never right.
After retrying the new pair satisfactorily, Ichoo wrapped it in old newspaper pages, tied with the stitching thread, the money received, and Rustomji carried home his new pair of hand-stitched shoes, until next Navroze, the Parsi New Year.
'બૂટ' boot, and not shoes, was the generic Indian word for all footwear, except for ‘eeshliper,’ slippers or 'sendl,' sandals. Many Nairobi residents will recall Pitamber Khoda on the old Government Road, a leading shoe maker and dealer.

Mombasa readers will recall two such shoemakers, at the side of the Regal Cinema building, off the then Salim Road, one I think was Parmar Shoe Maker.